Jada Morrow, the newest member of Toasters Toastmasters club in Lubbock, Texas, gave her Ice Breaker speech today. She talked about making sure you have joy in your journey and even passed out bubble gum.

Thanks for joining us early every Thursday morning, Jada!

Kim Davis Name Chamber of Commerce Ambassador of the Year

Kim Davis, a long time member of the Toasters Toastmasters club in Lubbock, Texas, was named the Lubbock Chamber of Commerce's Ambassador of the Year for 2016.

Kim is also the Area 62 Director which entails assisting six clubs in Lubbock. She's busy in and out of Toastmasters.

Congratulations Kim! And thank you for everything you do!
at 1:33 PM No comments:

Dustin and the McEwen Tales

Dustin McEwen wove a tall tale about the history of the McEwen family and won the Tall Tales contest at Toasters Toastmasters Club on September 8, 2016.

Email ThisBlogThis!Share to TwitterShare to FacebookShare to Pinterest
Labels: Contests

Toasters' newest member, Cryssie Addis, delivered her Ice Breaker speech today to a packed room of members and even a few guests.

Along with being our newest member, Cryssie is Mrs. Lubbock (https://www.facebook.com/CryssieAddisMrsLubbock/ .)

Congratulations on both your Ice Breaker and your crown!
at 3:37 PM No comments:

Working in the ag industry, Damon is using Toastmasters to further develop his communication and leadership skills in Toasters' fun and friendly atmosphere.

Today was a big day at Toasters club with lots of reasons to celebrate. Two of our newest members delivered their Ice Breaker speeches and the club learned that it is the first club in District 23 to complete the requirements for a President's Distinguished club for 2015-2016.

Doneen Fitzsimmons introduced us to the many names she's been known by during her life. From Neener to Mom to Mrs. Fitz and many others in between.

Amanda Norfleet told us that she is sometimes called the Coupon Queen but prefers the term Money Saving Princess and let us in on some of her secrets.

Congratulations Doneen and Amanda and welcome to Toasters!

Along with all the Ice Breaker excitement, Toasters learned that it is the first club in District 23 to achieve all of the goals necessary to become a President's Distinguished club during the 2015-2016 year. The official announcement of President's Distinguished status won't happen until April, but Toasters has already achieved 9 of the 10 goals (the 10th should be completed soon, too) and renewed all of our members prior to the April 1st deadline.

The club celebrated this news with cookies that were sent by the District Director.

Congratulations on your CC, Dustin! 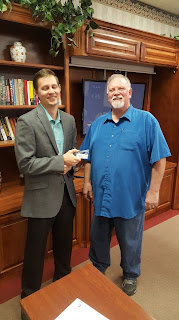 Congratulations Dustin! We're looking forward to your next award!