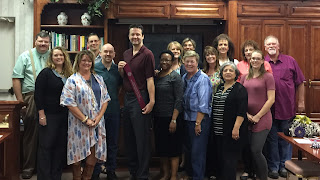 Tracy has been a member of Toasters Club since 2006 when he joined while he was Area Governor. Since then he's served our club as our President and Vice President Education. He has also served our fellow members in District 23 as a Division Governor, Lieutenant Governor Marketing, and District Director.

"There's something very special going on in Toasters," said Tracy. "We've been Distinguished the last 6 years. During that time, our members have filled 11 district offices. There's a great energy in this club."
at 10:41 AM